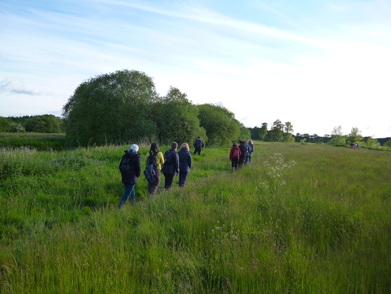 Stephen Longster of the Scottish Natural Heritage
& Liz Lavery, local expert, kindly guided a small group of us around the area near Burleigh Sands and drew our attention to some of the fascinating flora and wildlife. Jeremy Squire (SNH) was with us too and pointed out a distant Sea Eagle and some other birds.
These are just a few of the highlights that I snapped along the way.
I have also added some shots of some individual plants in other seasons to help illustrate some of the points made along the way.
Thanks by the way to Liz for kindly correcting me on a couple of errors in this page, (now corrected).
Known also as "Cough-Wort". Coltsfoot is often called 'Son-before-Father' because, unusually, the flower appears long before the leaves, then casts its downy seed to be dispersed by the wind, then for the remainder of the year all you will see are the leaves. Because it is wind-blown it often colonises disturbed or waste ground.
The flowers appear about February till around April.
Herbally it is used for coughs, and the dried plant smoked which may ease a dry cough, but apparently the benefits are gained from the mucilageous agents which would be destroyed by smoking or steaming. Coltsfoot Rock was a traditional confectionery and perhaps a better way to ingest the plant for medicinal use, but there are contraindications as the plant can cause potential liver problems, especially in children.
(link) (wikipeda article) 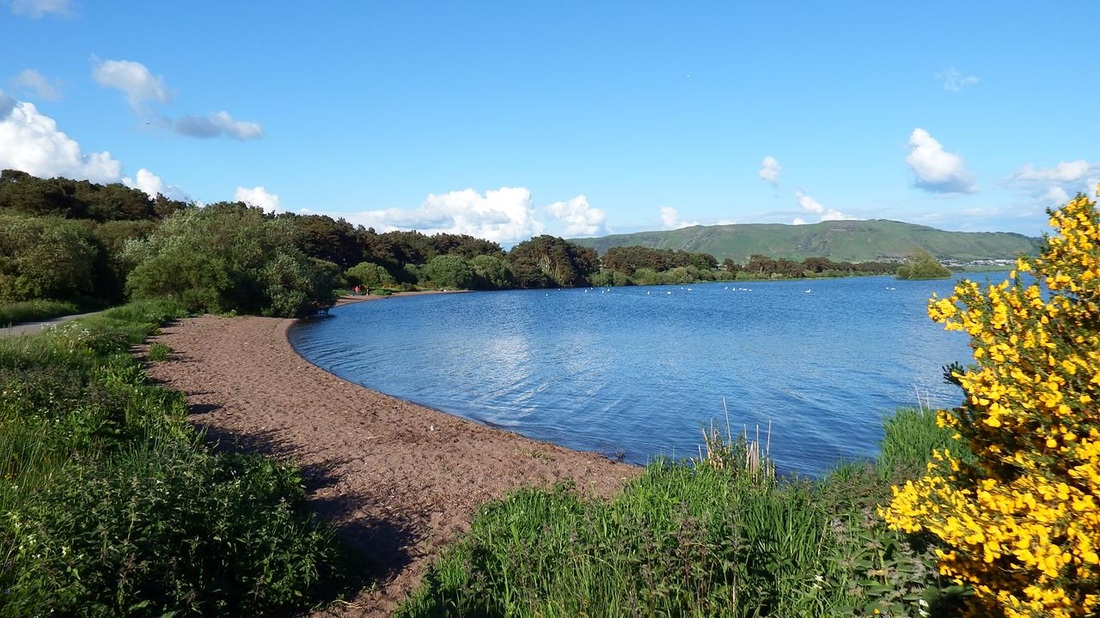 White Dead Nettle (Lamium album)
Also called "Archangel", possibly because it blooms around May 8th Archangel Michael's feast day.
We are in the family of the Two-lipped flowers here, the 'Labiates' or Lamiaceae which would include mint and it also has the distinctive square stem of that family.
A beautiful flower which is very attractive to bees, so they call it the "Bee Nettle" too. Known as the "Dead Nettle" because it has no sting.
I love the Wikipedia entry -
A distillation of the flowers is reputed "to make the heart merry, to make a good colour in the face, and to make the vital spirits more fresh and lively." (link)
﻿I have never tried that, but sounds like a little research might be in order.
Herbally it is interesting with possible uses on cuts & burns, but it sticks in my mind as a remedy for "Ladies Problems", as this interesting article explains (link) 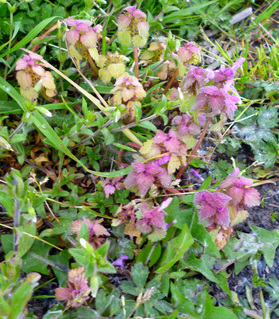 Red Dead Nettle Lamium purpureum
This is a much smaller relative, this specimen only a few inches tall.
Uses apparently include as a salad herb or tissane, but I have never tried it.(link)
Wikipedia article
Woundwort
Still in the lamiaceae family. A big nettle-like plant.
I am sorry, I did not take a photo of this strong-smelling plant, but here are a couple of links
The Apothecary's Garden (link)
Wikipedia (link)

Water Mint
Stephen showed us a lovely water mint - I could smell the fragrance from yards away. I did not take a photo.
Again, same family.